A downloadable game for Windows and macOS

MFA Prep Course is an artist simulator and training application for those seriously considering advanced degrees in the field of visual arts.

For gallery exhibitions, the game is played with a dual analogue controller. The two arms are controlled with the two analogue sticks respectively. The buttons on the right and left analogue sticks control the picking up and dropping of items for the corresponding hand. The home version uses wasd + space and the mouse.

MFA Prep Course was created in the winter of 2010 by Marek Kapolka and John Bruneau. It was exhibited at Works/San Jose that same year as part of Ring in the New. In 2011 is was shown as part of the SxM Guild official selection in the Black Gallery at San Jose State University.

The work is an interactive exploration of the idealized life of an artist. It is a game in so far as it occupies the same sociological slot that a game does- it is an escape from the drudgery of daily life, and allows the player to live the fulfilling and relaxing life that they wished they could. The game richly simulates the experience of drinking coffee and smoking cigarettes. Individual cigarettes will burn out, and individual cups of coffee will be depleted, but there are always more cigarettes in the box, and more coffee available in the machine, thus the pleasure and angst of completing a cup of coffee or cigarette are captured, but not the terror of running out for good.
- Marek Kapolka 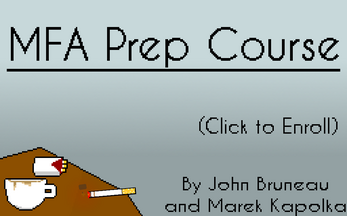